"Garbage Island" – this was Taiwan's unflattering nickname until not so long ago. The island with its highly developed industry did indeed have major difficulties with its waste.

For inexperienced Europeans, the garbage collection in Taiwan is quite a show.

In Taiwan, there are no garbage bins in every household – instead, a bin lorry drives through the streets of Taipei once a day (usually in the evening), allowing the citizens to leave their bin liners there. As the citizens can hardly be asked to sit on the street all evening, waiting for the waste to be collected, a clever idea has been devised. The yellow bin lorries announce their arrival with music. Via loudspeakers, every apartment is filled with the sound of Beethoven's "For Elise" played in an endless loop, giving the signal to leave.

Anyone who can walk and has waste to get rid of, grabs his trash bags and sets off. As if they were lured by the music, people of all ages move onto the streets. In a sense you celebrate a nice trash party, meet the neighbours – and separate the trash as well.

So far so good. But what happens to the collected waste next?

The amount of municipal household waste that accumulates in Taiwan daily is growing by approximately 5% every year. The Environmental Protection Administration (EPA) stresses that recycling the waste would significantly reduce Taiwan's waste accumulation. Around 42% of Taiwan's urban waste is recyclable; paper and plastic products alone account for one third of the collected household waste.

This is where machine technology of Neuenhauser Umwelttechnik comes in. The universal single-shaft shredder TARGO 3000 shreds the waste to piece sizes between 250-300mm, thus reducing the volume by approx. 30%. Metals are removed by the overband magnet and the remaining material is conveyed via the discharge conveyor belt to a downstream round baler. 30-35 bales weighing up to 1,200 kg are produced per hour. The wrapped bales allow the waste to be transported and stored until an adequate processing solution has been found. This prevents the waste from entering either sea or nature freely, while the smell and the danger of self-ignition are minimized. Even the unwanted vermin is kept away to the greatest possible extent.

"The output of the TARGO 3000 is severely limited by the downstream round baler. The machine runs almost exclusively on idle. We are currently planning further possible applications for the machine, as shredding household waste is the only use of this universal shredder. The efficiency of the machine opens completely new doors for us here in Taiwan," says Yu, Chen-Fu, sales partner of Neuenhauser, who is looking very positively into the future. "We are currently discussing with the government the use of the TARGO 3000 to process mixed construction waste and other waste.

The staff commended the user-friendly handling of the machine and the ease of maintenance and service. By opening the counter comb, daily maintenance is made remarkably simple. This way, the condition of the shredder tools can be checked quickly. The tools are screwed or wedged, making their replacement a quick and easy affair. Thanks to the intelligent direct drive, fuel consumption is on average well below 14 litres per hour. 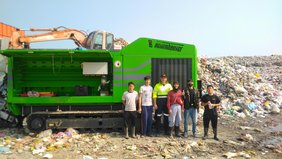 The staff is visibly satisfied with the new machine. Jan Legtenborg from Neuenhauser Umwelttechnik, third from the left, assumed responsibility for the training and instruction in March 2019. 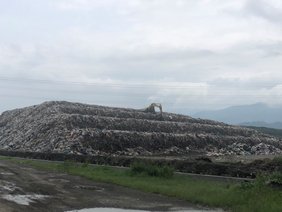 A dumping ground, as is typical of the country – mountains of household waste as far as the eye can see. 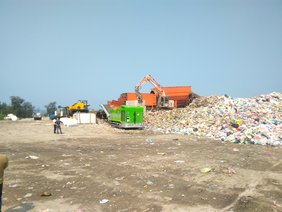 The TARGO 3000 shreds the waste while charging the round baler.

Some of the bales that have already been produced are clearly visible in this aerial photograph. The pile of waste above still needs to be "packed".

Via the telematics system, all important machine data including fuel consumption can be accessed from Germany.