Sales team of Neuenhauser Umwelttechnik is repositioning itself

Martin Schulte-Hemming has joined the team as the new Senior Key Account Manager. He brings with him the experience and expertise of more than two decades in which he has established worldwide distribution networks in the field of crushing and separating technology. Since April 1, 2021, he has been using his skills and capabilities for Neuenhauser Umwelttechnik. He is supported by Kai Conrads, who also joined Neuenhauser Umwelttechnik in April 2021. Conrads has a high level of expertise in the recycling industry. His most recent position was at a competitor where he was employed as sales manager for Germany, Austria and Suisse. Neuenhauser Umwelttechnik is pleased to have found in him a motivated Area Sales Manager for Central and West Germany as well as the areas around Berlin.

Erich Cordie has been a member of the Neuenhauser Group's large team for three years and will assume the responsible position of the Area Sales Manager for the German federal states Bavaria & Baden Württemberg. The mechanical engineer himself comes from Bavaria and is at the same time a real "Neuenhauser". Another familiar face that gives the sales team a profile is Frank Warrink. The skilled precision engineering technician has been part of the Neuenhauser family since 1999. As Technical Sales Manager, he supports and advises the sales colleagues, dealers and end customers on the technical possibilities of Neuenhauser Umwelttechnik.

Phillip Schläger and Gero Roolfs, both of whom are long-standing UT employees, are holding important positions in the internal sales service. Their competence is highly appreciated by customers and dealers. They run the back office of Neuenhauser Umwelttechnik and supply customers and dealers with offers for new machines and spare parts etc.

The man for the special requests is Sales Manager Wolfgang Brouwer. The technical engineer deserves to be described with all due respect as a doyen of Neuenhauser, since he has been a member of the company family since 1980. He has accompanied the development of Neuenhauser Umwelttechnik from the very beginning. Today he is the contact person for the stationary plant.

Lutz Wolf, CEO of the Neuenhauser Group: “We are delighted to have found a powerful team in the newly formed sales team that will market our products both nationally and internationally.This will strengthen the position of Neuenhauser Umwelttechnik on the world's markets and spur us to continue developing and building innovative machines. " 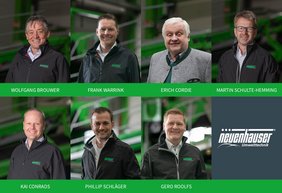 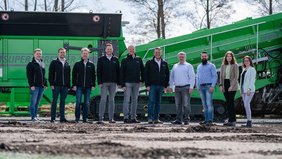