True to the guiding theme "Innovating the World of Textiles", the Textile Division of the Neuenhauser group of companies presented at ITMA, the world's largest textile machine fair.

From 20th to 26th June 2019 the world's largest trade fair for textile industry took place in Barcelona. Since it was founded in 1951, representatives of the international textile industry have met every four years at ITMA and find out about innovative technical solutions for the textile value chain. An appointment that is firmly anchored in the calendar of Wilhelm Langius, business unit manager of the Neuenhauser textile machine segment, and his team, which has been precisely worked out the fair for a long time. "The ITMA is of particular importance for the textile division of the Neuenhauser group of companies, as we convince a broad specialist audience of our wide range of services in the field of textile machine construction and present ourselves as an international premium manufacturer.

This was not least due to the liveliness of the stand. With 15 exhibits at the largest trade fair stand in the history of Neuenhaus so far, there was so much movement that the trade visitors had to take a closer look to see how Neuenhauser and his ideas for Industry 4.0 Driving concepts revolutionizing automation in weaving and spinning mills.

Sohler-Neuenhauser presented the “FX Systems”, a stationary suction system for weaving machines, in addition to the SP100 traveling cleaner specially designed for weaving mills, which is characterized by its high performance and extreme reliability. In addition, Sohler-Neuenhauser presents the latest energy-saving models of the well-known traveling cleaners of the UNICLEAN series, which are specially designed for use on modern, super-long spinning machines. Neuenhauser Winding Technology showed winder of the "Eco Winder" and "Center Winder" series. Neuenhauser Rosink presented a completely new spinning cylinder grinding machine to the specialist public for the first time, while Neuenhauser Automation demonstrated its solutions in the area of ​​automation for spinning mills, from spinning can transport to the packaging of packages, including automatic quality control. As a specialist for slip and warp beams, Scholze Germany completed the range of services of the textile division and presented a novelty of a marking system for warp beams. With several electrohydraulic vehicles, including a warp beam inserting vehicle for the upper and lower boom, Genkinger Material Handling offered a complete program for handling the logistical tasks in the weaving mill.

Probably the greatest attention was paid to the newly developed Driverless Transport Systems (AGVs), which were presented for the first time on two show stages and were received with great interest by the general public. Neuenhauser, for example, presented an AGV for driverless spinning can transport that navigates freely using laser technology and is characterized by a special gripper for picking up a wide variety of spinning can shapes. Genkinger Material Handling Solutions presented the counterpart for use in weaving mills on a second show stage - an AGV for the transport of large docks.

And even if there are still four years ahead of everyone involved until the next ITMA in 2023, thanks to its successful appearance as a market leader in a wide variety of textile machine sectors, a big step has already been taken in a sustainable (textile) future. "We are continuously developing our portfolio so that we can prove it again at the ITMA in four years' time, that we can follow the trends in textile machine construction and always answer 'Yes, we can' to questions from our global customers," says Jörg Neyer about direction for future development. 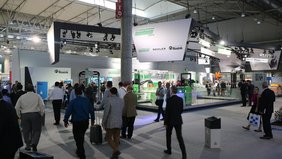 The Textile Division of the Neuenhauser group of companies convinced with a highly modern, lively and open stand concept at the ITMA. 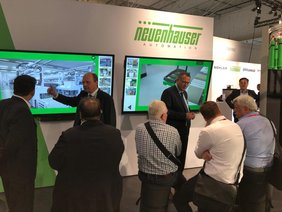 Spaces in front of the interactive screens were always filled. In discussions, the trade fair visitors were given an insight into the diversity of the corporate group. 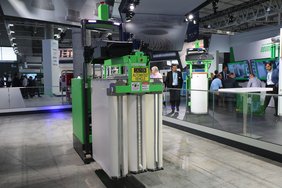 Convinced as an eye-catcher: the driverless transport systems for use in spinning mills (above) and in weaving mills (below) 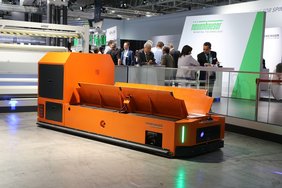